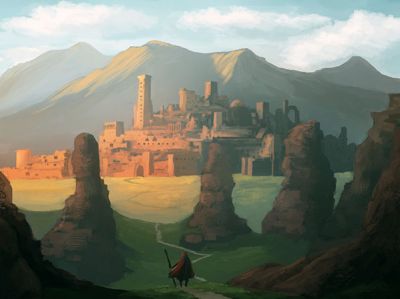 Astrapola was once one of the prosperous River Kingdoms, a city-state ruled by a magocracy of astrologers called the Wisdoms of Astrapola, one high astrologer magocrat for each of the Starry Wisdoms in the sky. The city was constructed as a great wheel, mimicking the turning of the Vault of Heaven, with twelve great towers arrayed around the city, one for each of the Starry Wisdoms.

But then came the Shattering, and with that a fear of arcane magicians who looked beyond the mortal realms for their power. Astrapola happily welcomed those refugees who fled Liminal, including a number of its magicians, who were often turned away from other places: the fear of mortals meddling in the other-planes leading to another Shattering became very prevalent, and most folk shunned such magic.

Unfortunately, within two generations, Astrapola fell victim to that hysteria. In short order, Astrapola became scorned by their neighbors for their sorcerous ways, and all it took was a few bad harvests and other rounds of misfortune before the River Kingdoms were looking for culprits to blame, and found it in the twelve towers of Astrapola.

The military city of Ryun Math and the fanatics of Tunmaril joined forces first, and marched on Astrapola, and were joined shortly thereafter by several mercenary companies of Elderun and troops from Dorvaer in short order. Though the renowned Starblade knights of Astrapola and the astrologer magic of the city fought valiantly, there was only so much they could do against the combined might of the other city-states. Though Astrapola sent envoys to the city-states of Lady's Rest, Yldanmor, Maringath, and the Jadespires, those states did not come to their aid. Astrapola even begged the Guilds to intervene, but the dwarven Guildsmasters remained staunchly neutral, as always.

Within a year, nothing remained of Astrapola. Its defenders fought until the bitter end, giving their people time to flee into the Almanni Theocracy and north into the Hordesmarch (where many are believed to have been enslaved by the clans of the Horde). The city's gates were sundered, its riches stripped, its great libraries set to the torch, and its ruins left.

Now Astrapola is a creature-haunted ruins. Many of the fell beasts of the area quickly settled into its ruins, laying claim to territories within it. Adventurers occasionally come through here, seeking left-over treasures or the hordes the monsters within these crumbling walls have laid claim to. Rumors say that there are several humanoid tribes within it, and other monsters beside, and those beasts speak of some creature that calls itself the Master of the Twelve Towers.