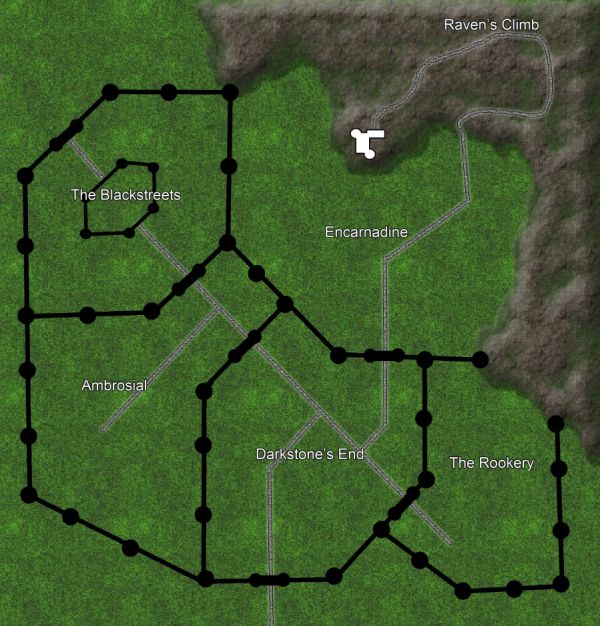 The Capital of the Raven Sovereignty
One of the mightiest cities of the Shadowfell, Gauntpeak is home to the Raven Queen, one of the Dark Powers that rule the myriad lands of the Shadowfell. A dark land with an almost perpetual autumnal cast, the Raven Sovereignty is mostly agricultural lands. In contrast, Gauntpeak is distinctly urbane; its people hold subtlety and genteel behavior above all other forms of interaction. Ruled by a noble class made up mostly of merchants whose families have been raised to the service of the Raven Queen, Gauntpeak is a bastion of civility.

But this is merely a mask. Like all of the Shadowfell, there is a darkness that broods at the center of its culture. The unending feuds between the noble houses are merely one expression of this. Gauntpeak is marked by areas of tremendous affluence, and squalid slums the equal of the Warrens in Liminal.

The Noble Houses of Gauntpeak

Gods of the Shadowfell

Elitest of Houses, called the Raven's Own, placed along the mountain road that leads to Castle Gauntpeak.

The terminus of the Darkstone Road, a great road that runs through many of the local domains.

Red-light district, filled with brothels, festhalls, taverns and inns. Also home to a large population of artists, wastrels, and hedonists.

Working class neighborhood, imbricate with the city of Liminal.

Slums filled with the poor and criminal. Also filled with ravens, as the locals know that they can receive a monthly food stipend if they prove they have been raising and releasing ravens into the city.