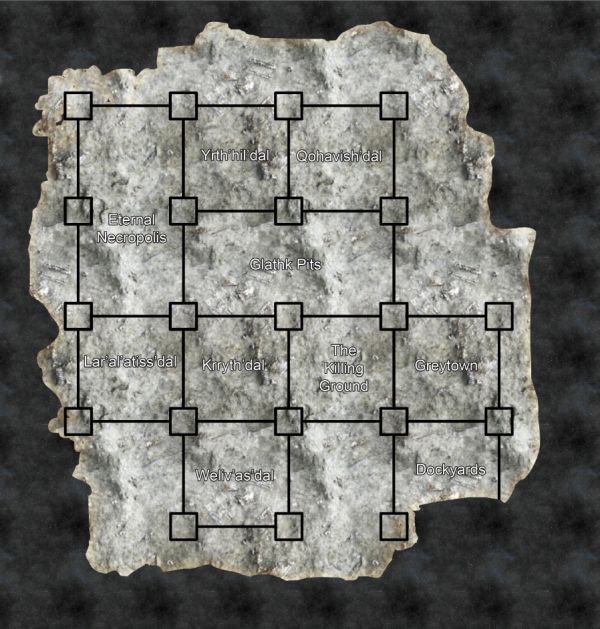 Dominion of Eternal Xana
A great city laid out in strict geographical precision, according to strident military guidelines, the githyanki of Xanastyr serve their general-queen, the lich named Eternal Xana. A vassal of Queen Vlaakith CLVII of Tu'narath, Eternal Xana is obsessed with military precision and tightly controlled society. Even among the militaristic githyanki, the Xanastyrai are seen as particularly hidebound.

Xanastyrai society - including the small handful of colonies and conquered domains - is divided into social units called chalaxass, or "legions". Roughly analagous to clans or tribes, each of the chalaxa strive to provide their own internal structure in all things: each is bidden to be independent and strong in its own right, providing not just armies, but also support structures such as familial units, mercantile efforts, craftsmen and the like.

Population: 65,000. Githyanki are the dominant people of Xanastyr, and found in all its districts. Indeed, it is illegal for non-githyanki to be in any part of Xanastyr save Greytown and the Dockyards.

Eminent Office of the Medal

Fortunate is the githyanki who manages to gain entry into the hallowed halls of the Grey Collegium. Though each of the chalaxass maintains its own occult mentors, those with great magical potential are often sent to the Grey Collegium to learn, their astronomical tuitions paid for by their legion. As such, there is a great deal of pressure on the magi of the Grey Collegium, but it pays off - this school of magic turns out some of the most potent warlocks in Xanastyr, and every one of the ch'r'ai has studied here. The Grey Collegium is mostly subterranean, and found in the Eternal Necropolis.

The vast tiered garden-graveyard of the Eternal Necropolis boasts as its center an ancient temple to a long-dead god.

A district imbricate with the City of Planes, Liminal, Greytown is the only district other than the Dockyards where non-githyanki are permitted entrance and residence.

An expansive set of docks for the tying-up of astral skiffs and spelljammers, the Dockyards belie the orderly nature of Xanastyr, being quite chaotic and prone to sudden violence and crime.

A cordoned militarized zone just outside of Greytown that separates Greytown from the rest of Xanastyr. The risk of invasion from the city of Liminal is too great for a militaristic, paranoid race like the githyanki to ignore, so they have taken steps to see that an array of forces awaits any who try to gain entry into the city. In addition to multiple squads from all of the chalaxass, there is always at least one ch'r'ai stationed here, as well as a pair of red dragons. The fields of the Killing Grounds are often used as sparring grounds by the armies of Xanastyr.

The underside of the chunk of rock that is the foundation of Xanastyr is home to acres and acres of fields, pastures and orchards. Xanastyr's food supply comes wholly from these rich lands, and Xanastyr even provides enough excess to serve as a sort of breadbasket for other githyanki citadels. Lining the edges of these fields are tall stony abuttments in which have been dug caverns as homes for the red dragon allies of the githyanki. They defend the fields in return for a weekly tithe of livestock and thralls.