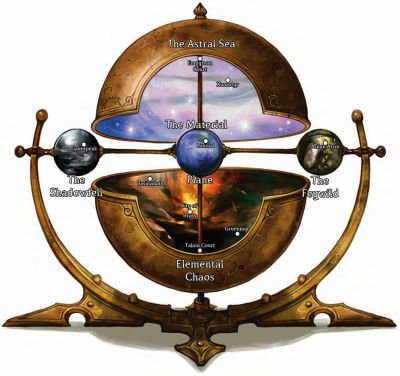 The following information is familiar to those with training in occult principles and planar lore. The average person outside of Liminal is only aware of the existence of many, many places outside the world. Even those within Liminal are aware of individual places and locations within the planes, rather than the philosophy on how those planes interrelate and connect together.

In their absence, the First Gods sought reconciliation with their parents. But since neither could abide the others' preferred domain, the First Gods crafted the Material Plane. Hidden in the recesses of existence, they found powers of life and death, and using them as the hammer and flame, forged the edges of the Elemental Chaos and the Astral Sea together to craft a between-place, where gods and Primordials alike might come to dwell.

When the gods and Primordials finally met once more, their separate planes had irrevocably transformed them and in short order, they fell to war. The stitching of the mortal plane provided the perfect weapons, and gods and primordial alike used the stuff of the multiverse to craft all manner of creature to serve as weapons, troops and prize.

This is the world of mortal folk, also known as the World, the "mortal world" and many other concepts, depending on who is being spoken to. It is also sometimes called "the middle world" to compare it to the relative "positions" of the Fundamental and Parallel Planes.

Above & Below: The Fundamental Planes

Ancient expanses of immense raw power, the Fundamental Planes act as the building blocks for all the rest of the cosmos. These planes are vast expanses of pure energy in which float "bubbles" of solidified existence, finite "places" that exist like islands in the infinite natures of their parent Fundamental Plane.

A silvery, shimmering plane of infinite potential, the Astral Sea is the spawning place of purpose, thought, desire, ideas and all such higher concepts. The Astral Sea itself is a realm where dreams and thoughts escape to once born, returning like fish to their spawning pools. Indeed, these realms are not just those of mortal fancy, but of the gods themselves, the gossamer nature of the Astral Sea giving solidity and speed to the worship and prayers of mortals.

Within the Astral Sea are the myriad Astral Dominions, finite domains of various powerful entities who have shaped these places to suit their needs - or discovered the dominions that others have left behind. Some of these places include:

The roiling, ancient source of all things, the Elemental Chaos gave rise to the very Primordials themselves, who then used the infinite creative potential of this place - vast, primal, elemental - to create everything else. Unlike the Astral Sea, the Elemental Chaos answers less to thought than it does to sheer power.

The Parallel planes have earned this name for a simple reason: the geography of these planes matches that of the Material Plane. Where a mountain stands in the mortal world, there also stands a mountain in the Feywild and the Shadowfell alike. The mirror reflections mean that these planes overlay one another, and in some places, the veil that separates them thins. Usually this is the barrier between the Mortal World and the Shadowfell or the Mortal World and the Feywild, but occasionally a thinning is known to occur between the Feywild and Shadowfull, bypassing the Mortal World entirely.

A realm of abundant and overflowing life essence, the Feywild is home to the fey, entities of near-immortal provenance and power. Great and potent entities walk these lands like unto gods; they are called the archfey, and most of the fey are aligned with one or the other of the many Sidhe Courts that have sprung up around the archfey.

For the most part, the entities of these lands dwell in simple harmony with the flourishing natural life around them. The primary exception are the eladrin, who build great cities that merge with (rather than replace) the natural world around them. The eladrin are considered the nobility of these lands, and make up most of the lords of the various Sidhe Courts.

If the Feywild's intrinsic nature is that of overabundant life, in the Shadowfell is death given its fullest expression. A dark land filled with shadows, the denizens of these lands have long-ago learned to deal with the dangers of its lands - most notably the undead. The Shadowfell is the source of many occult powers, including that of necromancy and nethermancy, as well as the various shadow-magics.

The Shadowfell is a land divided between warring giants: the Dark Lords. Though once each was a normal mortal entity - in many cases, denizens of the Mortal World - something in their dark natures called to the blasphemous powers of the Shadowfell, which reached out to snatch them up. So awesome was the potential within each that something in their souls answered the call of the Shadowfell itself, and it invested them with tremendous power within the lands they control.

Outside Places: The Anomalous Planes