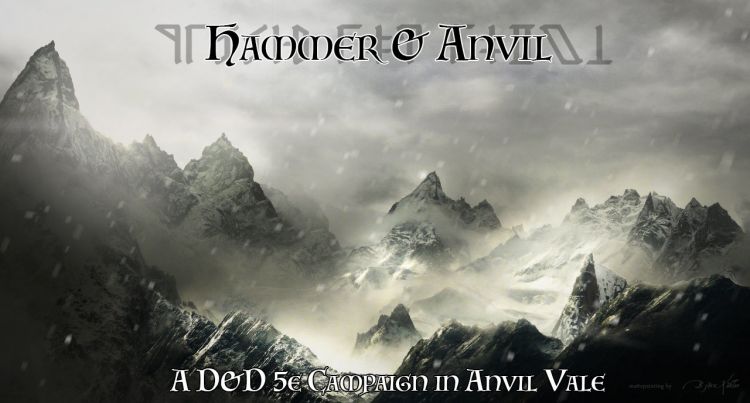 The Anvil Vale is widely regarded as the ancestral home of the dwarven peoples of the lands, the place of their ancient creation and the old halls of their Urram Athair (the ancestor-heroes who are said to have founded each of the Great Clans of the dwarrofolk). In ancient days, the great Hammer Peak was home to the Dwarro-Crún, the one true ruler of dwarrokind, but those days are lost to legend. Dwarven legend claims that the Last Dwarro-Crún slumbers within the stone at the roots of Hammer Peak, and will awaken to save their people when their need is greatest.

The Vale is more than home to the dwarrofolk, however. Long ago the Dwarro-Crún took refugees fleeing outland cataclysms into the protection of their shield, and this is a tradition the dwarrofolk maintain to this day. Human, gnomish, and halfling settlements can be found throughout the Vale. By and large, these settlements are agricultural in origin, providing ample food for Mount & Vale (the colloquial term used by Valefolk to refer to both the dwarven citadels in the Starfrost mountains and the settlements of the Vale proper). These settlements usually run alongside the Silver River, which runs out of the mountains and feeds Loch Winter, in the south of the Vale.

This fertile, rich mountain valley, which sits beneath Hammer Peak "like the anvil beneath the upraised hammer" (the source of the Vale's name, in fact), has long been protected by the dwarrofolk of these lands. The settlements of the Vale are each guided by a Thane, an elected representative from its non-dwarven people who serves for ten years, and sits on the Thanemoot, an advisory council to the Guildsmoot.